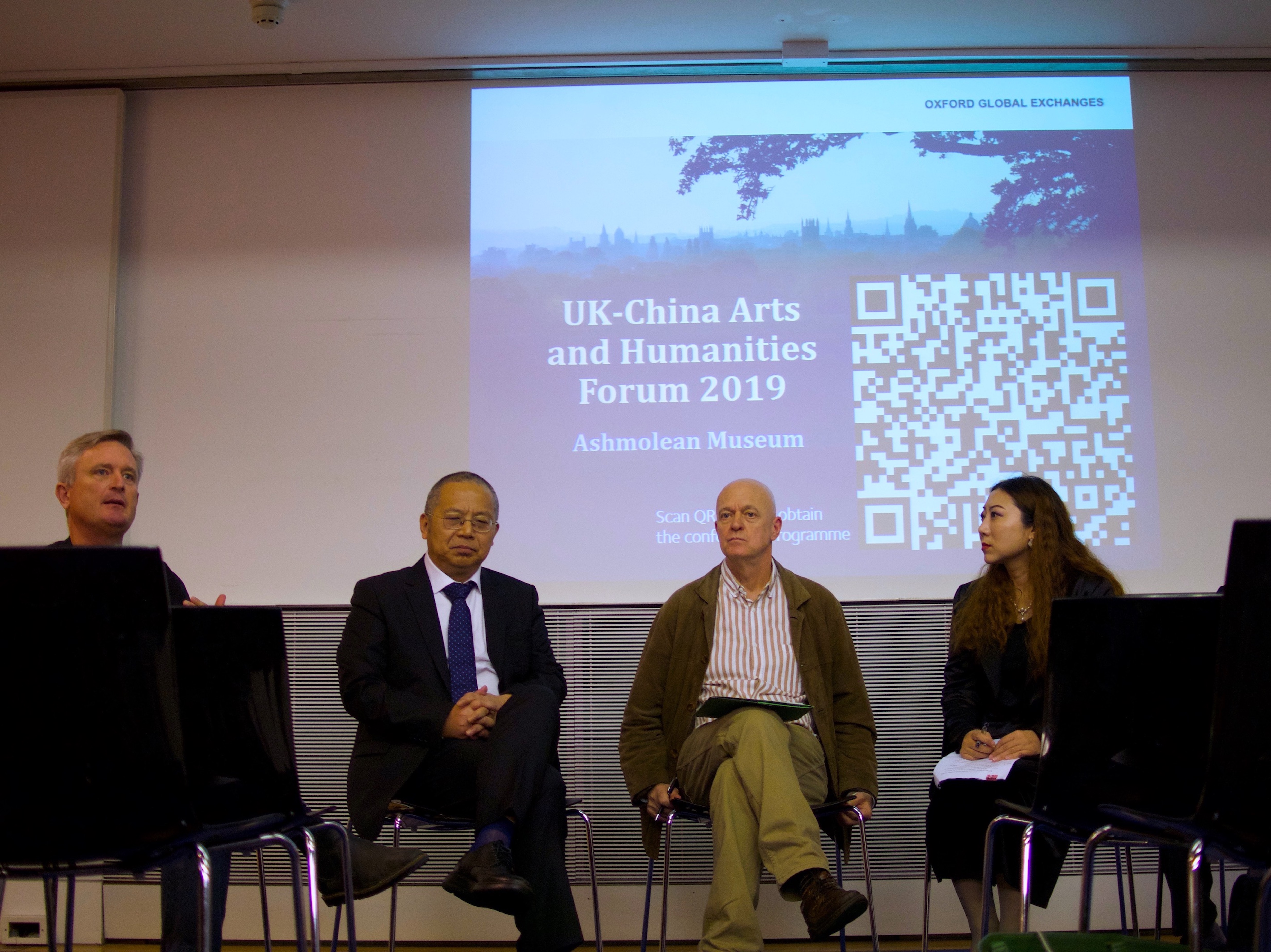 The conference sessions covered the following topics:  ‘The Public Value of Literature, Cultural, and Critical Theory’, ‘The Transformation of the Paradigm of Cultural Criticism in the Age of Artificial Intelligence’, ‘The Diversified Feminine Ecological Writing’; ‘International Education in the Arts’, ‘International Film Education: From the Technical to the Conceptual’, and ‘Can Creativity be Taught’.

Speakers in the conference came from Chinese Academy of Social Sciences, Nanjing University of the Arts, Royal College of Art, the Ruskin School of Art, Said Business School, the Ashmolean Museum, and the University of Oxford.
‍

Curator of Chinese Art at the Ashmolean and Associate Professor of Chinese Art in the Faculty of Oriental Studies. She was previously Curator of Chinese Ceramics and Textiles at the British Museum. Other appointments include President of the Oriental Ceramic Society 2012–15, and J.S. Lee Memorial Senior Fellow 2012–13 (Beijing). She has published widely on Chinese art including books on ceramics and silk, articles on many aspects of the material culture of the Northern Song dynasty (960–1127) and a series of collection and exhibition catalogues on modern Chinese painting. She is responsible for three galleries in the Ashmolean: the permanent galleries China 3000BC – AD800 and China From AD800, and the Khoan and Michael Sullivan Gallery for Chinese Painting which shows two paintings exhibitions each year.

Professor of English and Related Literature at the University of Oxford and a Fellow of St Hugh’s College. He writes on literature, the modern state and the freedom of expression; the history of writing systems, cultural institutions and publishing; multilingualism, translation and interculturality; and on the promise of creative criticism. He is currently part of a research team working on PEN and the freedom of expression (see writersandfreeexpression.com).

Professor and Tenure-track Research Fellow of Institute of Literature at Chinese Academy of Social Sciences. Fellow of the Royal Asiatic Society of Great Britain and Ireland. Deputy Secretary General of Chinese Society for Aesthetics. Councillor of Chinese and Foreign Biographical Literary Studies Association. Previously a visiting scholar at University of Cambridge and University of Oxford. Published over 40 research papers in the journals of China, the UK, USA and etc. Her main fields are Literary and Cultural Studies, Life Writing Studies.

(pseudonym is Tian Ni) is Professor and Deputy Director of the Department of Contemporary Literature, Institute of Literature at Chinese Academy of Social Sciences. She devoted herself to the study of Chinese contemporary literature, film and television criticism and so on. Mainly in the fields of Feminist Literature and Culture Studies. She works on Literary Creation as well.

Practicing fine artist whose work is rooted in the traditions and cross-disciplinary nature of sculpture and drawing. He has and continues to exhibit across the UK, Europe, US and China. Gary has over 25 years of experience teaching and leading programmes at HE level in UK art and Design institutions. Gary is currently the Academic lead senior tutor at the Royal college of Art for the Graduate Diploma in Art and Design.

Head of School at the Ruskin School of Art, DPhil supervisor, and Fellow of Queen’s College. His research explores the fascinating intersections of contemporary art and politics, with particular emphasis on installation, performance, exhibitions and cultural infrastructures, especially in parts of the world beyond the North Atlantic region.

Professor, PhD supervisor, Dean of the School of Humanities, and a member of the Academic Committee of the Nanjing University of the Arts (NUA). He is also an associate editor of the Journal of NUA (Music and Performance), a Member of the Ministry of Drama and Film Professional Teaching Steering Committee, so on. Shen has published more than 60 academic papers on film and television theory and modern and contemporary literature. He has presided over 9 projects of the Ministry of Education, Ministry of Culture, and the Jiangsu Provincial Government Project and won 5 awards such as the Outstanding Achievement Award of the Philosophy and Social Science of the Jiangsu Provincial Government.